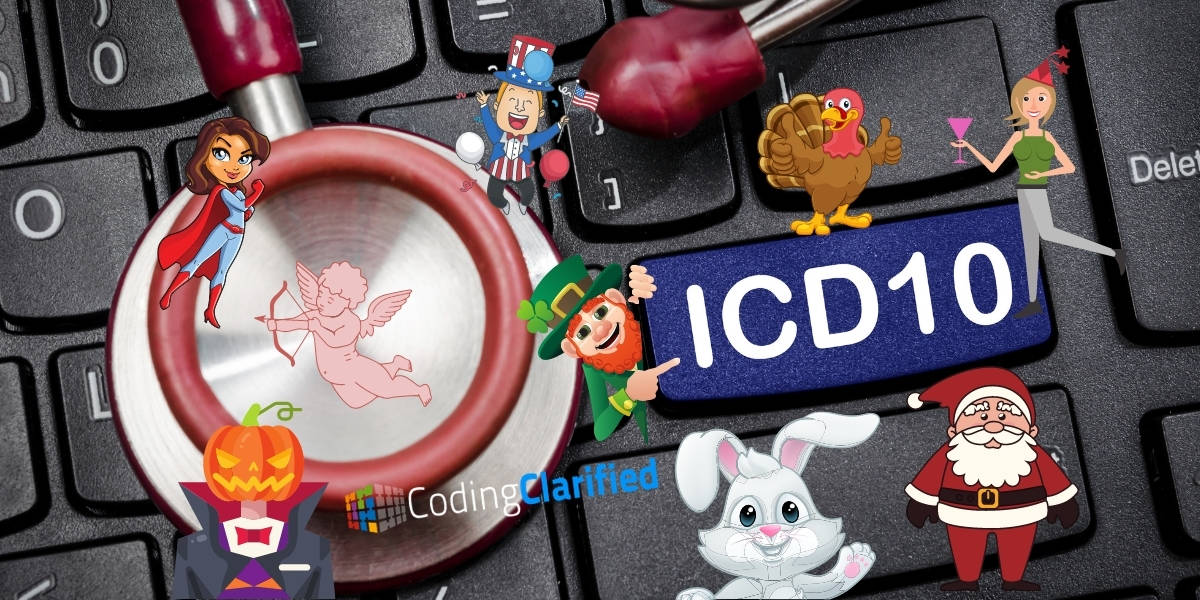 News
By Janine Mothershed
Coding Clarified knows how hard it is to find fun and silly ICD-10 Medical Coding Codes online. We wanted to spread some holiday cheer and show you just how fun Medical Coding can be. Remember there is a code for that. How fun are these codes? We have codes for most of the major holidays including; New Year’s, Valentine’s Day, St. Patrick’s Day, Easter, Mother’s Day, Memorial Day 4th of July, Halloween, Thanksgiving and Christmas.
JANUARY
New Year’s Medical Coding ICD-10 Code

New Year’s Eve is a fun time to celebrate the end of the year and moving to the new year. Happy New Year. 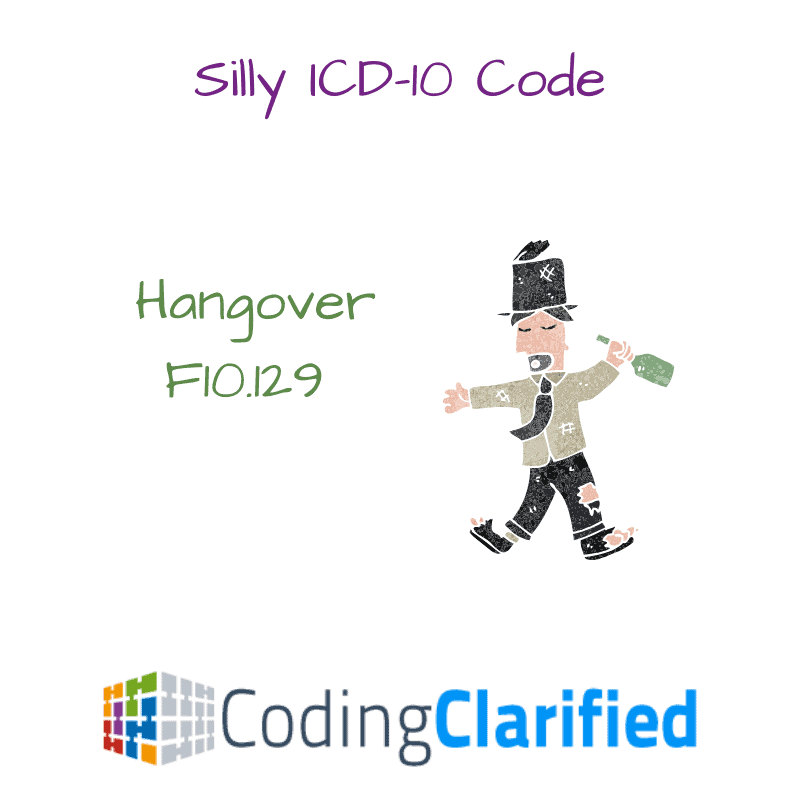 We hope that you do not end up in this guys’ shoes after your New Year’s Eve Celebrations. Surprisingly, there is a code for that.


Valentine’s Day is a fun day once a year to celebrate the love of your life. Lots of red and pink, roses, hearts, chocolates, cupids and kisses are incorporated in this holiday. Happy Valentine’s Day. 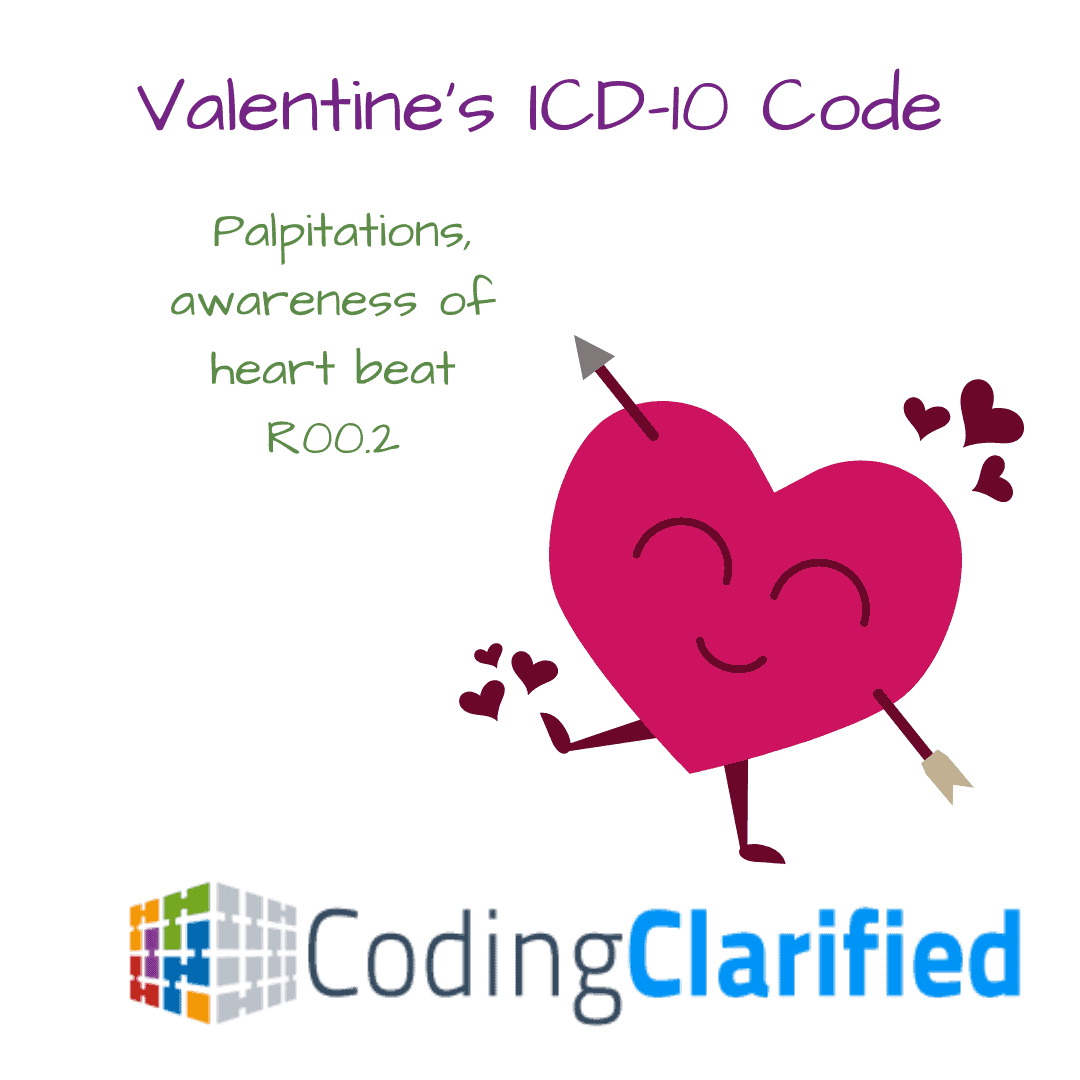 Follow your heart or at least be aware of it this Valentine’s Day. There is a code for that. 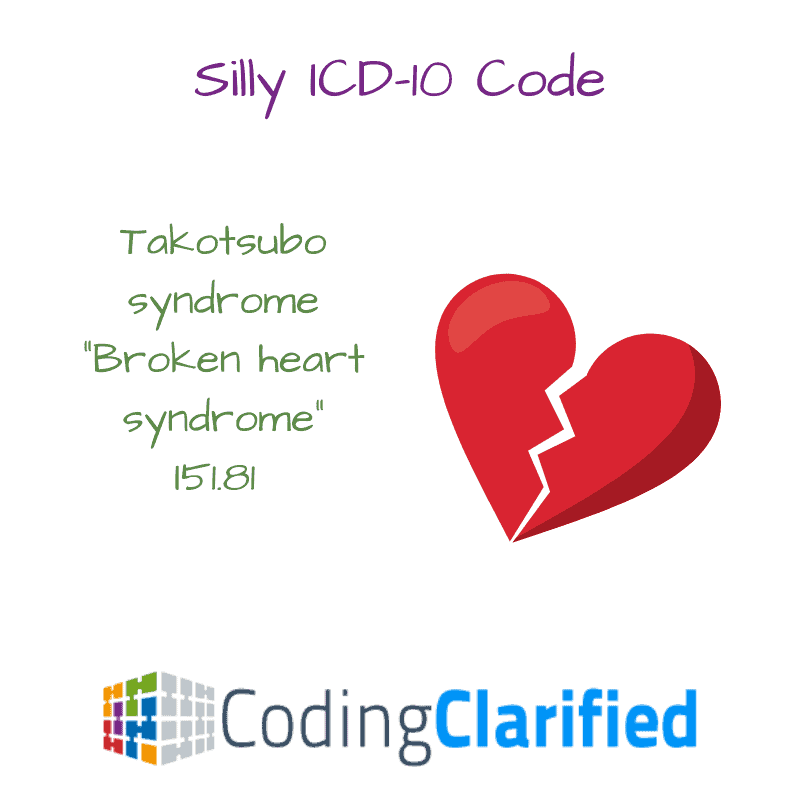 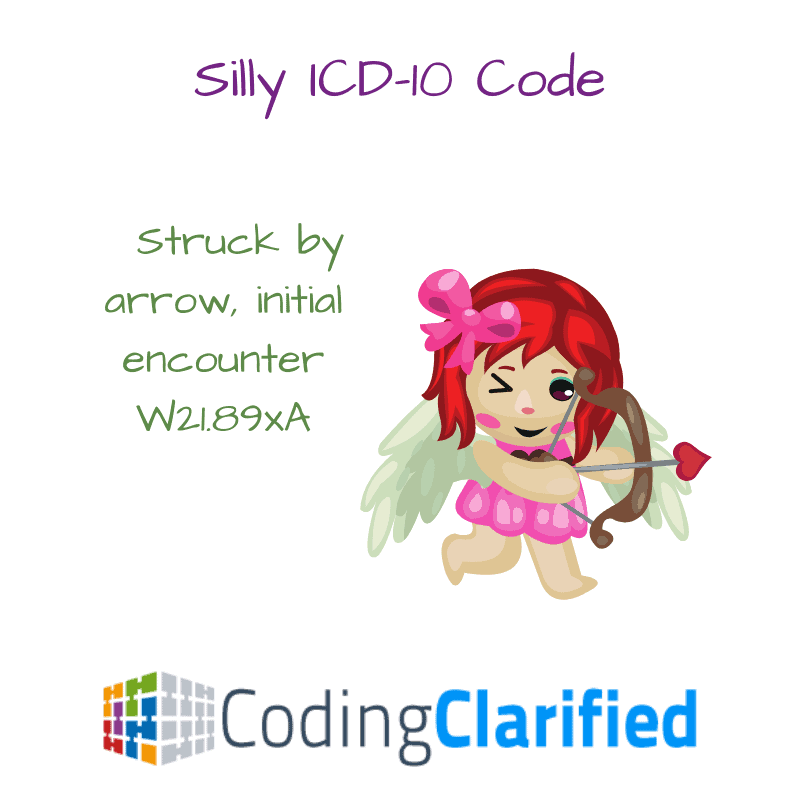 Watch out for those cupids this Valentine’s Day. They like to strike you with an arrow.


ICD-10 Code W21.89XA Striking against or struck by other sports equipment, initial encounter 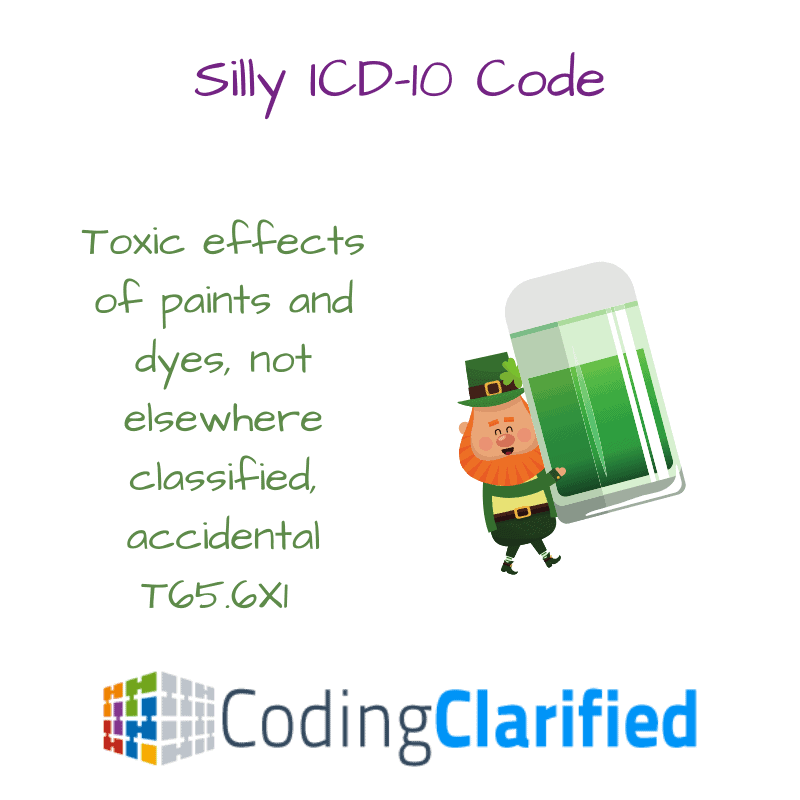 Be careful with the green beer this St. Patrick’s Day. You may end up at a visit with the doc, at least you know we have a code for that.

Easter is a fun holiday for the kids or if you are religious. Easter bunnies, chicks, Easter eggs, Peeps and chocolate are all staples of this entertaining day. Happy Easter. 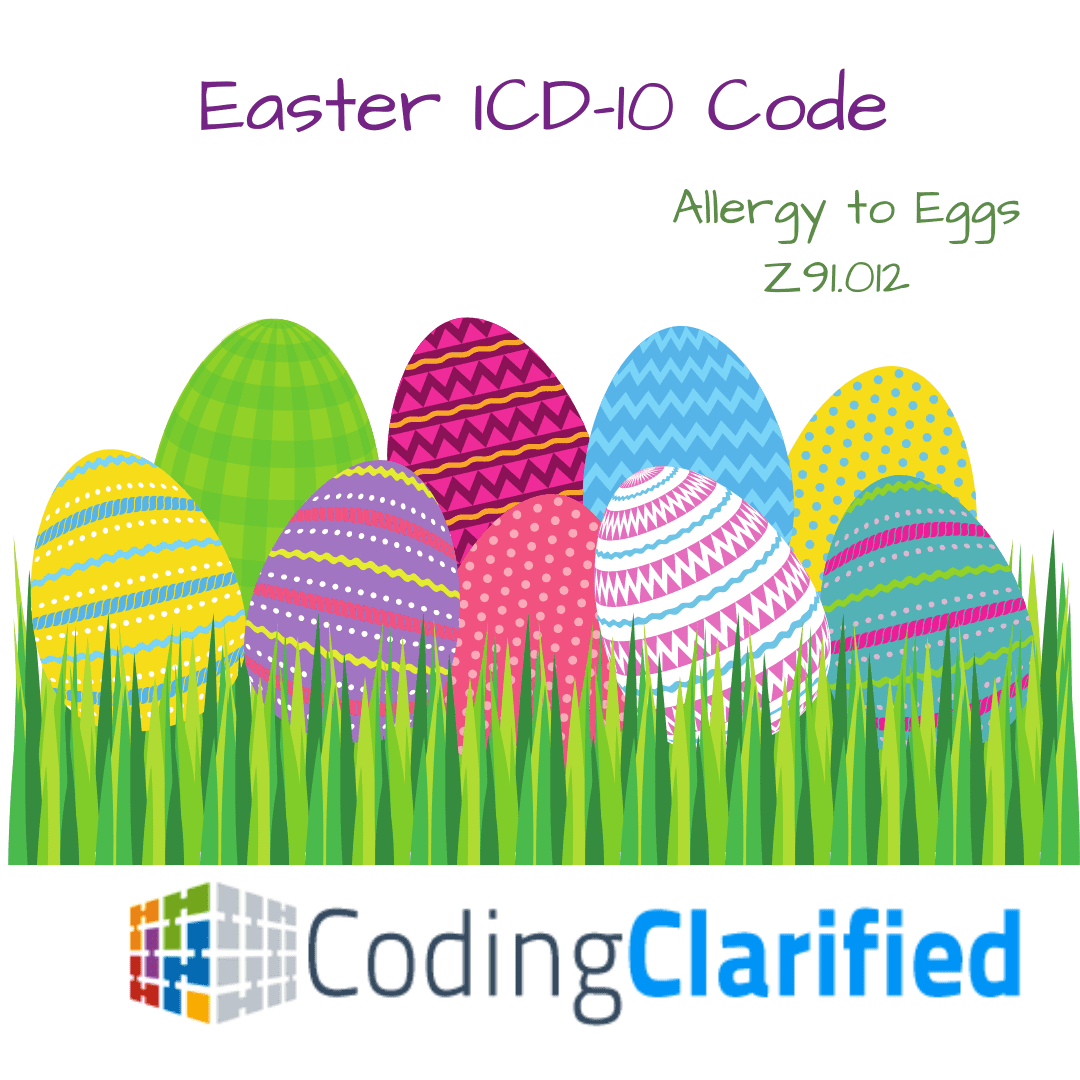 Eggs are always part of Easter. That is, unless you’re allergic to them. If you are, be sure to use plastic ones to avoid this code.

Mother’s Day is such a nice day to create lasting memories with your family. Cherish the times that you have with the women in your lives. Happy Mother’s Day to all the moms out there. 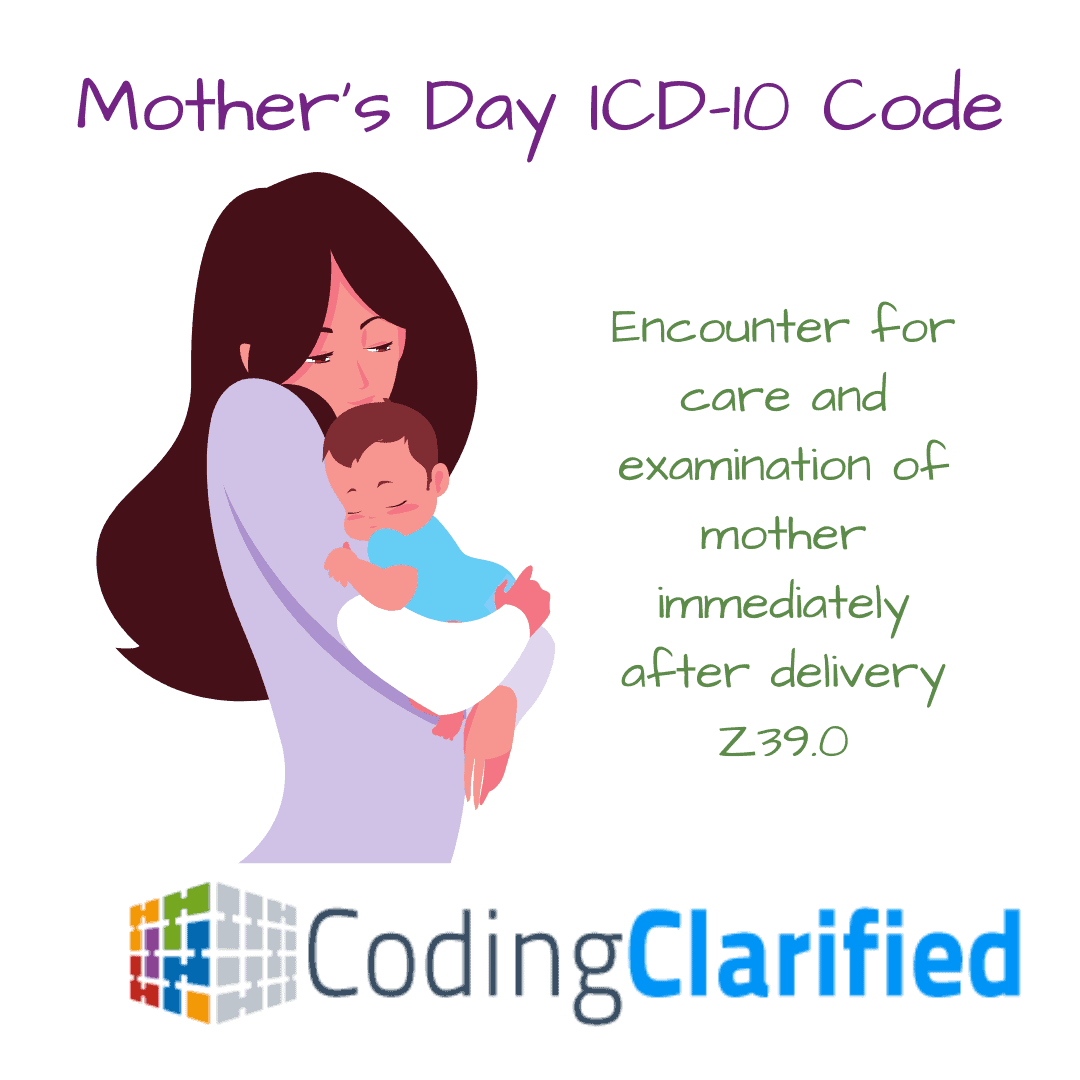 Mothers sure do go through a lot of work during the process of childbirth. Good to know that they are getting the care and attention that they need in addition to the newborn.

ICD-10 Code Z39.0 Encounter for care and examination of mother immediately after delivery

Memorial Day is a great time to celebrate the men and women who were fallen service members in the Military. We usually celebrate with our family and friends at a BBQ. Thank you to all the vets who have served. 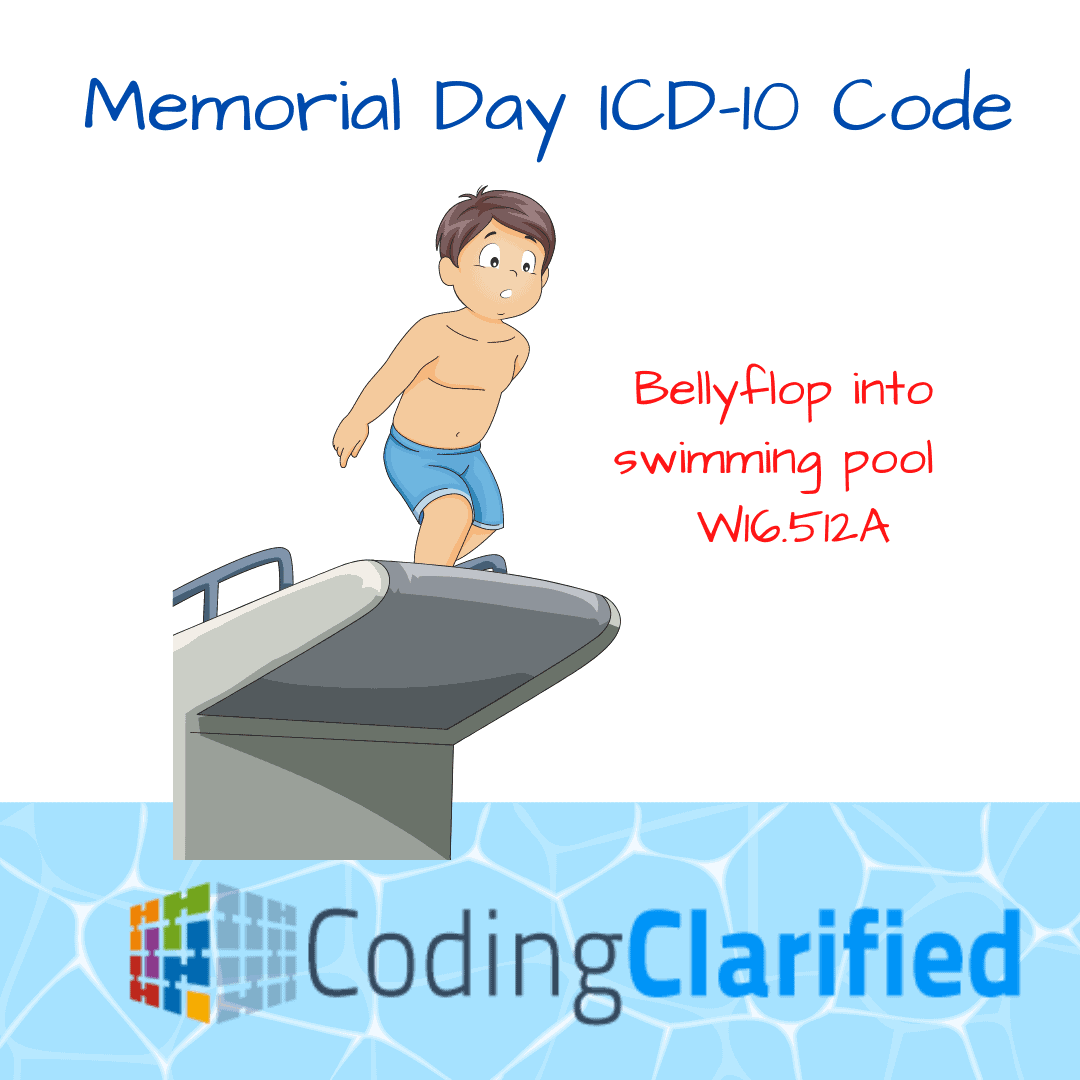 Belly flops can be painful. It may be a good idea to avoid this code this Memorial Day weekend. 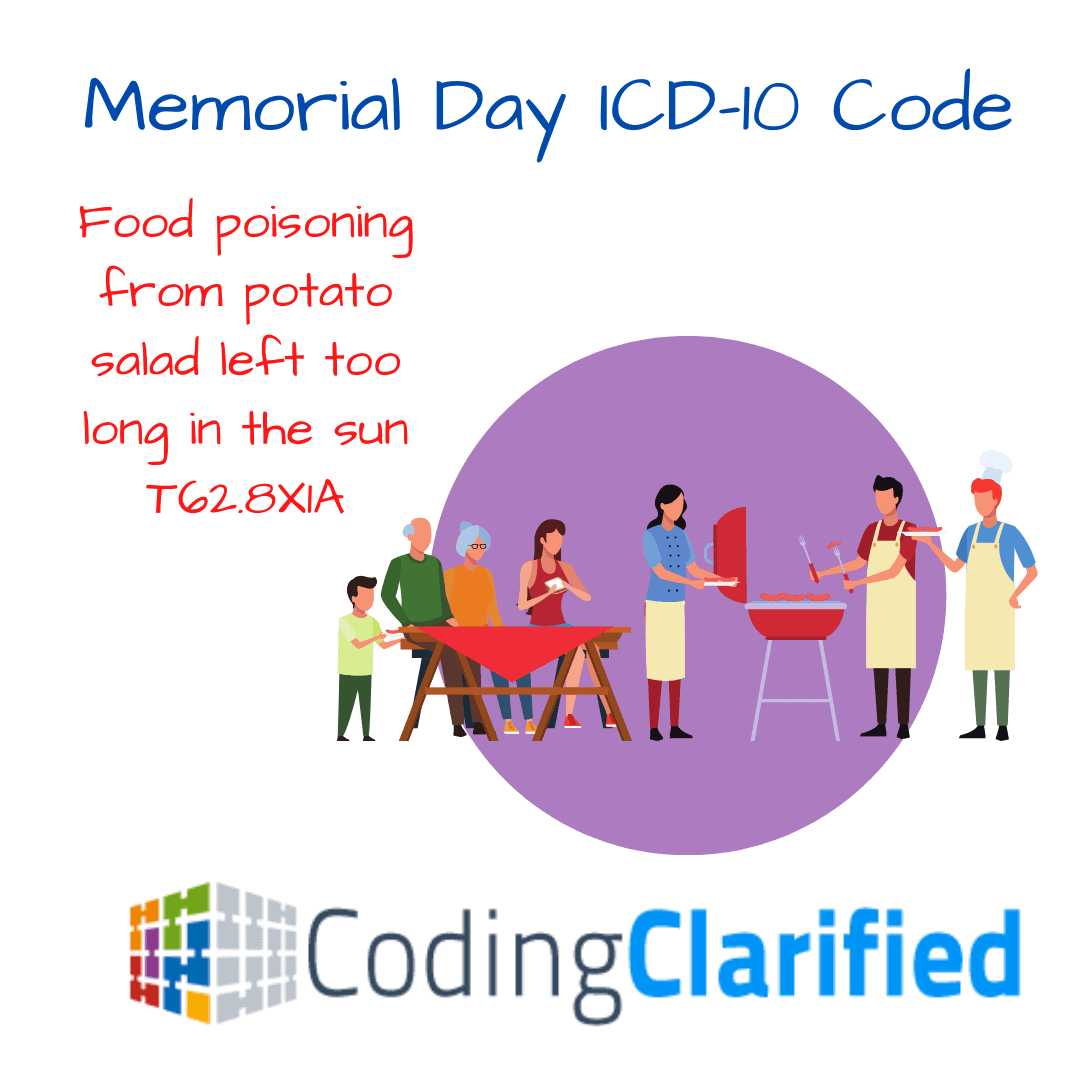 Food poisoning from potato salad left too long in the sun

JULY
4th of July, Independence Day Medical Coding ICD-10 Codes
The 4th of July is the annual celebration of nationhood of the United States of America. It commemorates the passage of the Declaration of Independence. 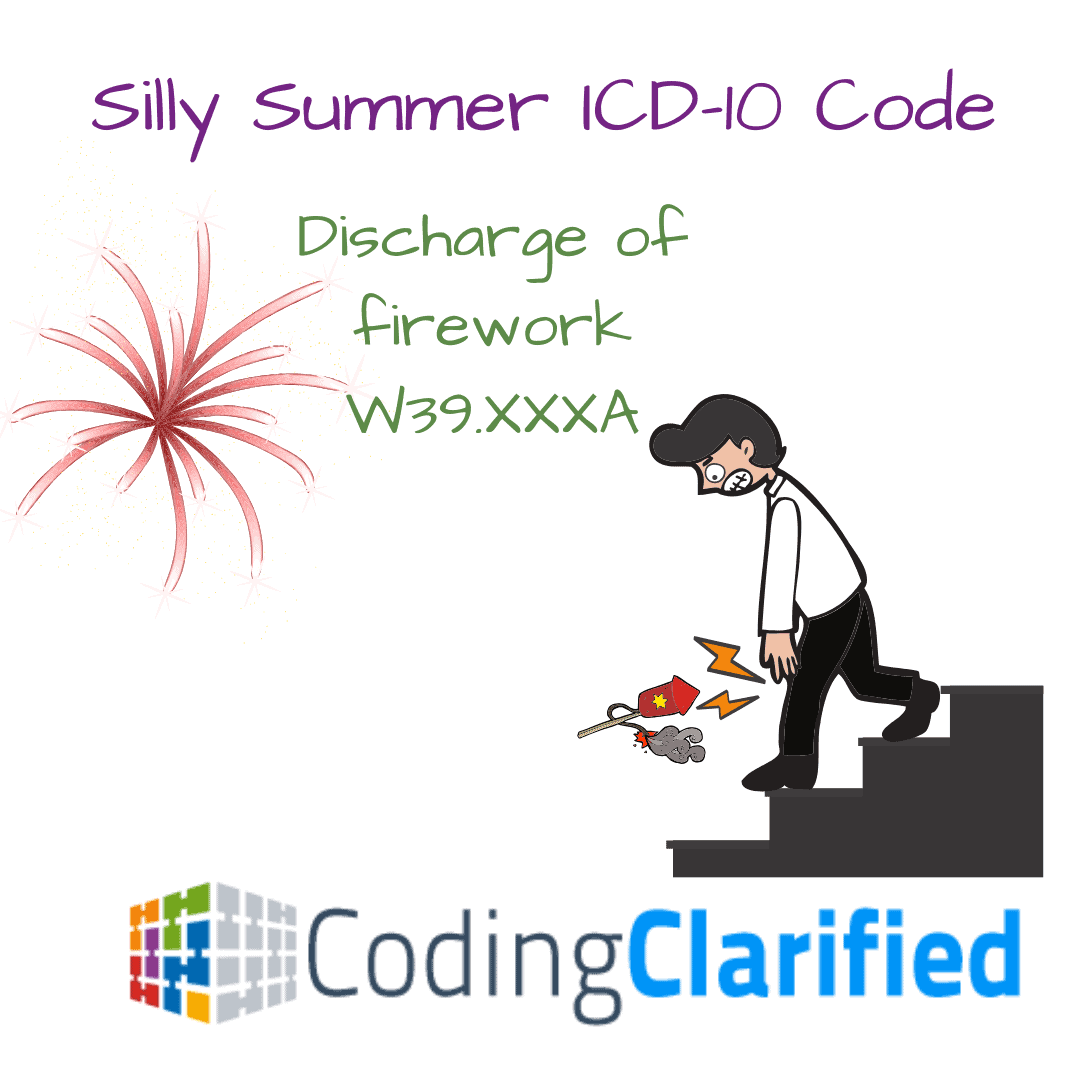 Be careful this 4th of July. Stay safe when using fireworks. If your aim is off, you may end up with an explosive surprise. If accidental discharge of firework occurs, rest assured we have a code for that. 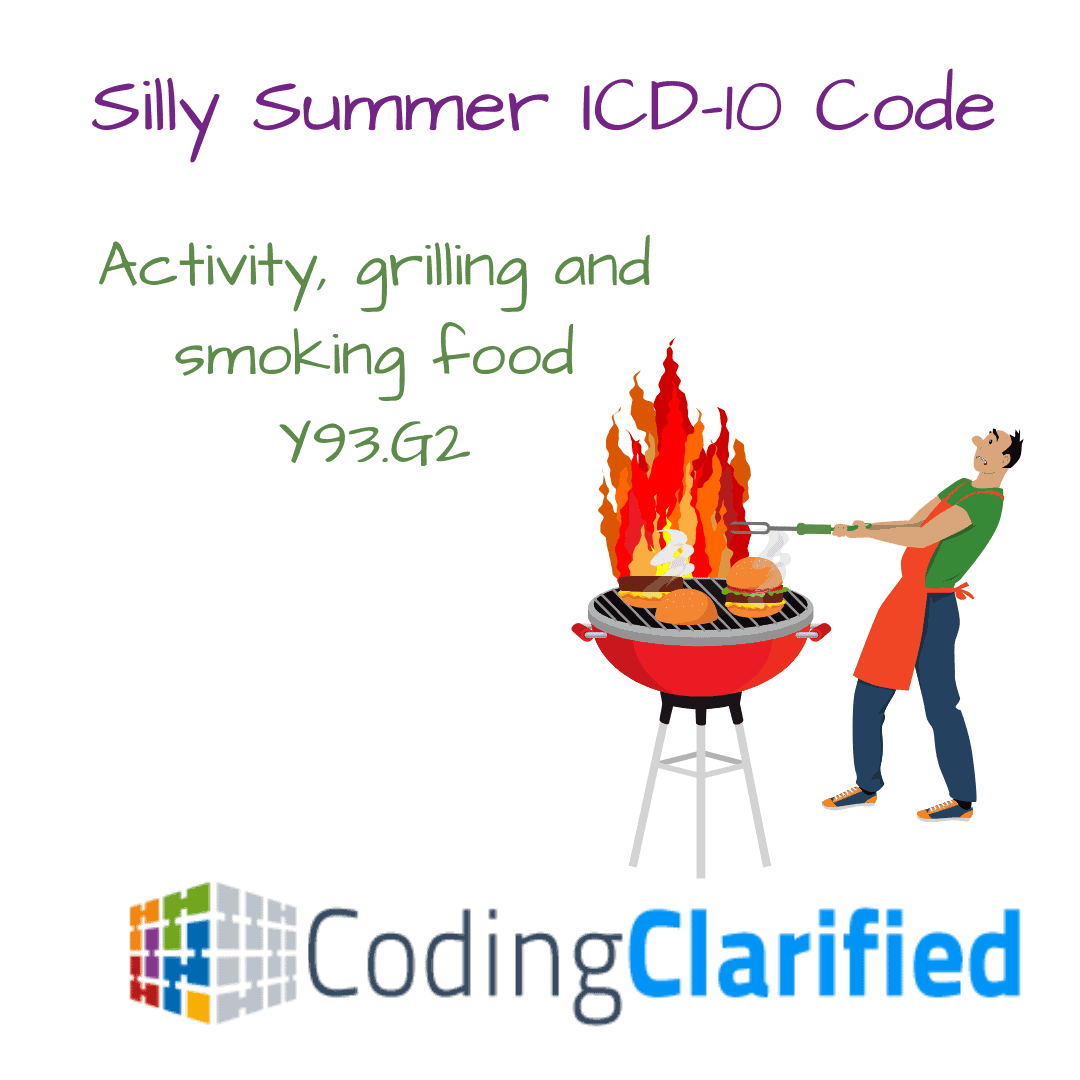 Keep an eye on your grill when cooking or you may end up burning more than just your food.

OCTOBER
Halloween Medical Coding ICD-10 Codes
Halloween is so much fun and is known for dressing up in costumes and going door-to-door trick or treating. Pumpkins are a fun symbol of this holiday does also involve some creepy characters. 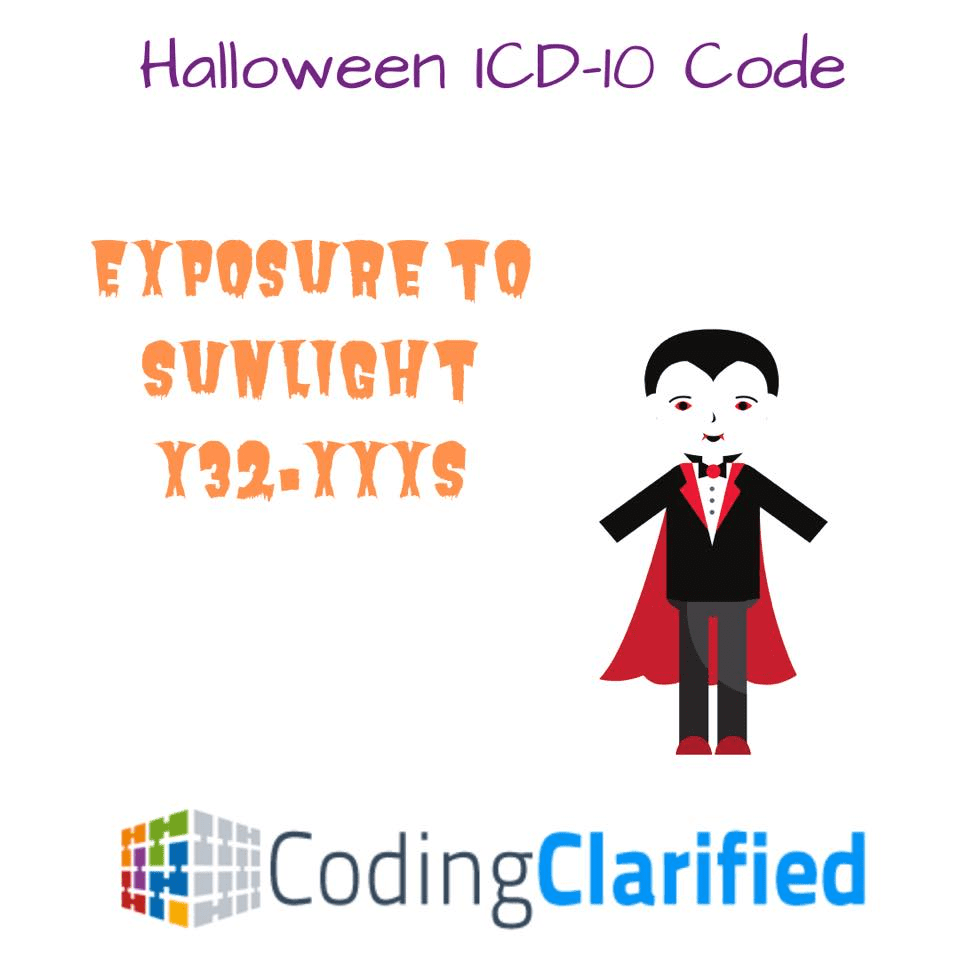 For all the vampires out there, remember the sun is not your friend. Sunburns are painful and may cause severe skin damage. 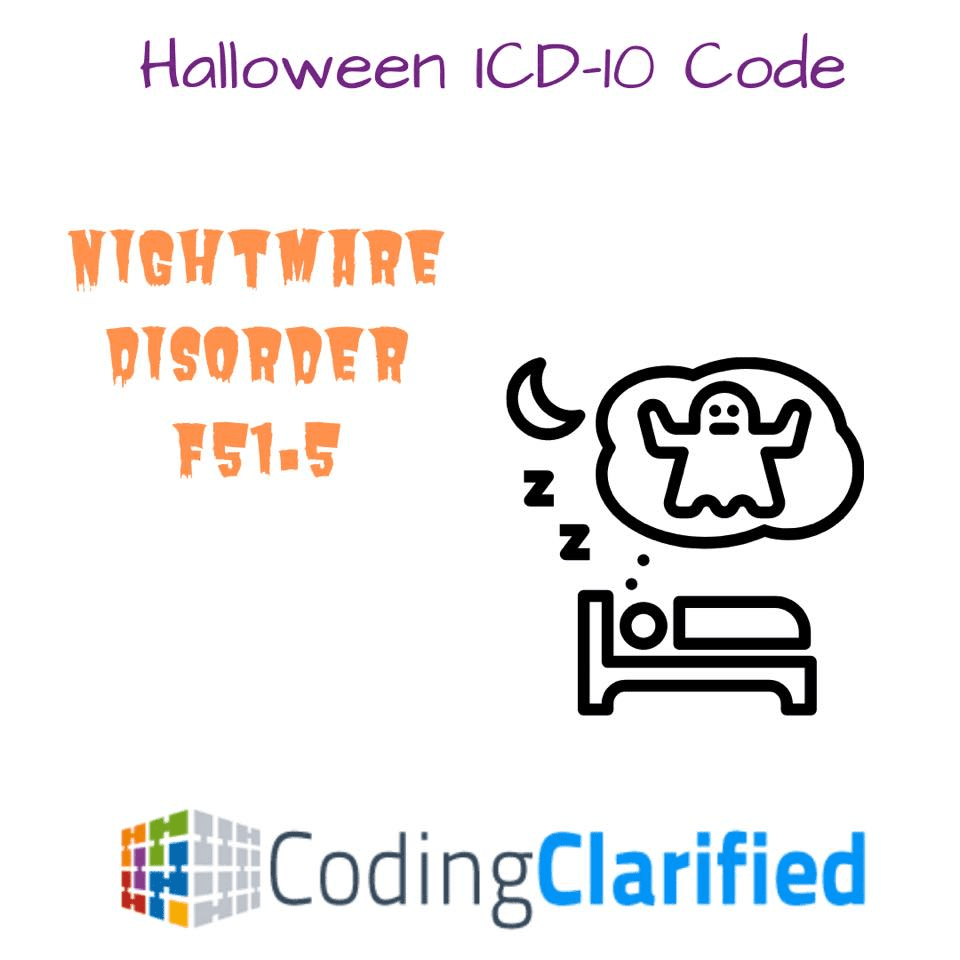 Watching scary movies right before bed may not be the best idea. This may lead to excessive nightmares. There is a code for that.

During the Halloween season, it’s hard not to run into a few fake spiders. For those of you who have a fear of spiders, good luck. 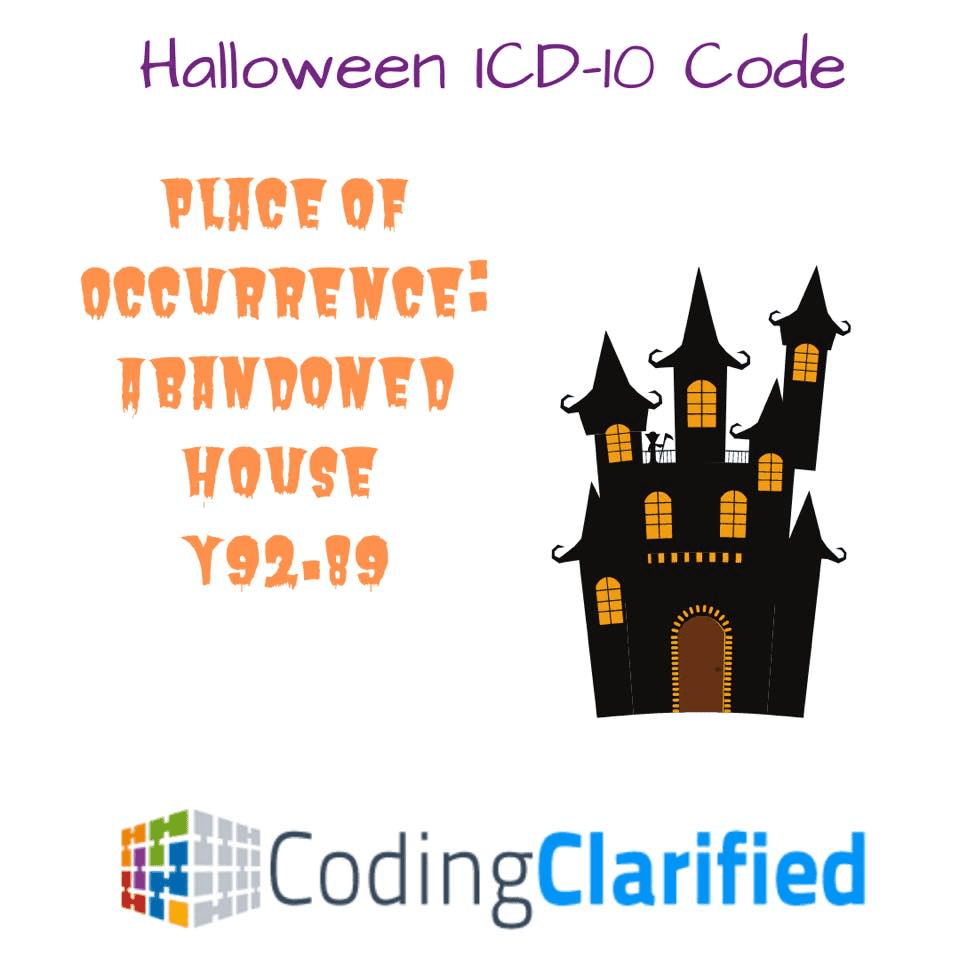 One of the most spookiest places to be on a Halloween night is an abandoned house. Beware, you may run into a few ghosts or goblins inside. Did you know there is a code for that?

ICD-10 Code Y92.89 Other specified places as the place of occurrence of the external cause

Inclusion Terms: Derelict house as the place of occurrence of the external cause 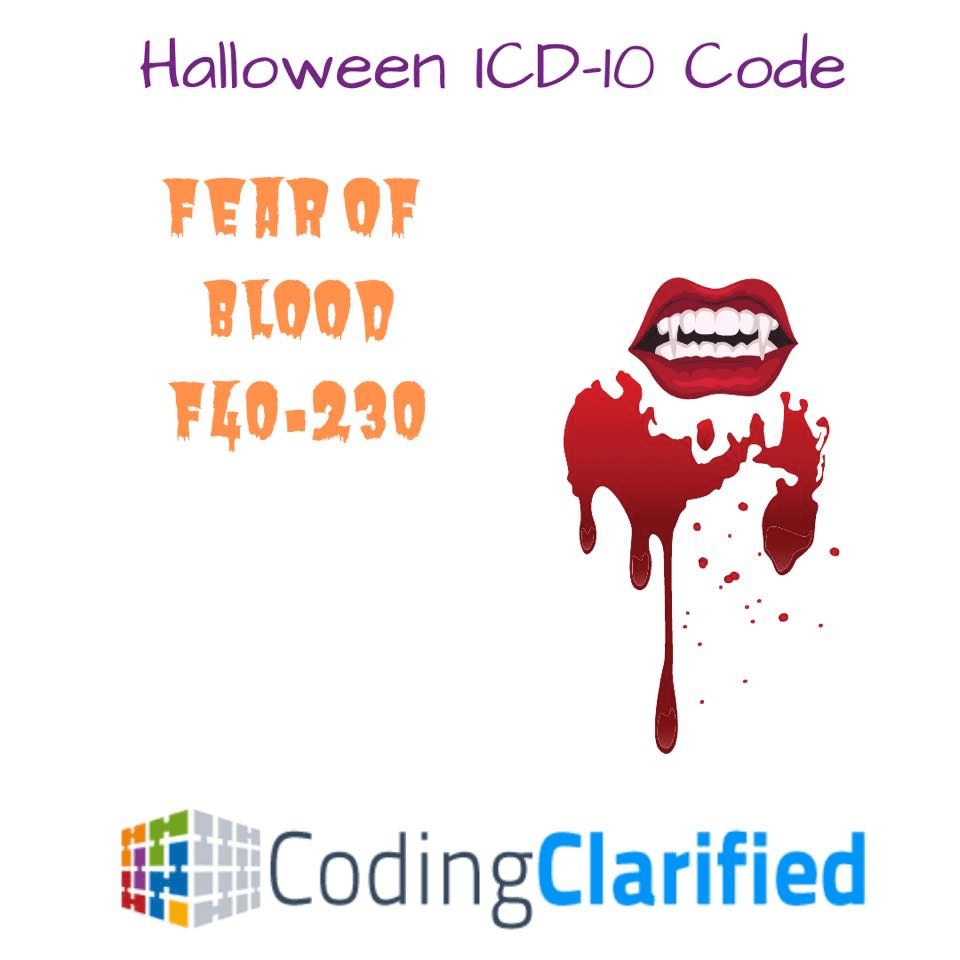 If you are scared of blood, have no fear the blood everybody has on at Halloween is fake. We have a code for that. 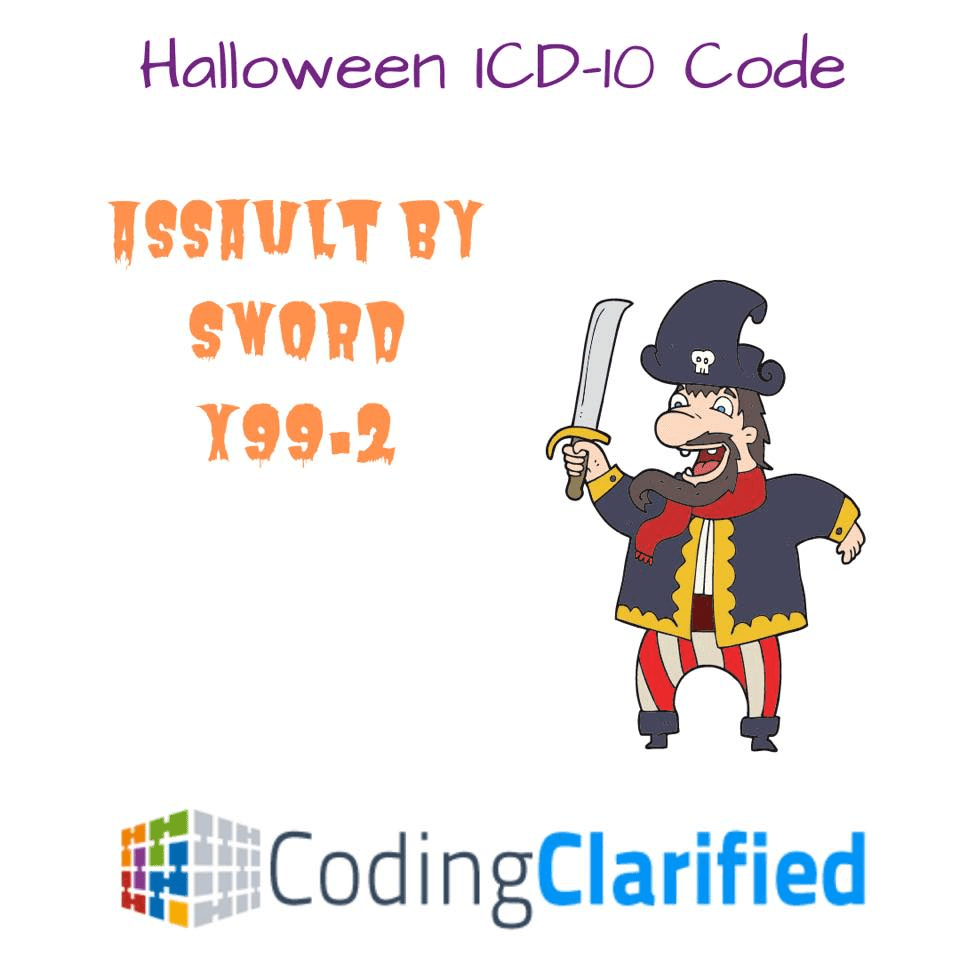 Watch out for all the pirates walking around on Halloween. You wouldn’t want to be faced

with an assault by sword, if you are, we have a code for that.

Thanksgiving is the day to give thanks for all the blessings in your life. It is typically celebrated with family during a Turkey Dinner. 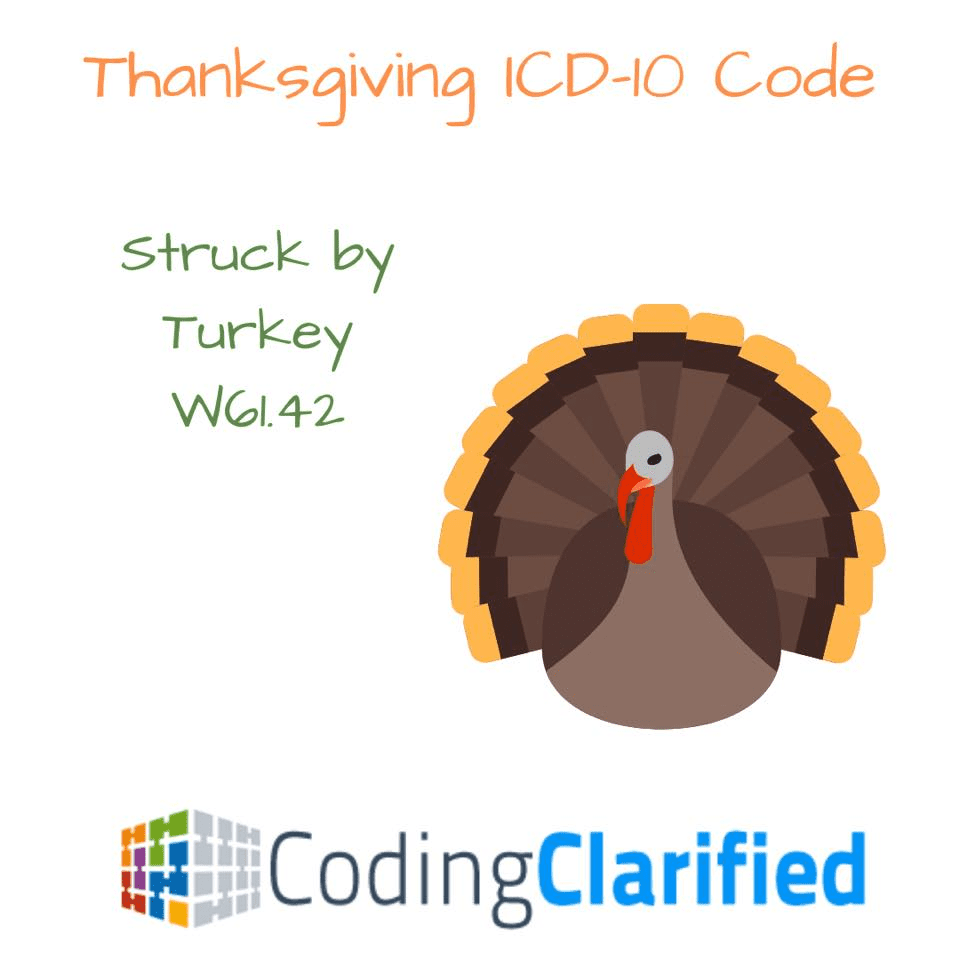 Turkey is the main course of traditional Thanksgiving feasts. Be sure to watch out for these guys before they are on your plate. 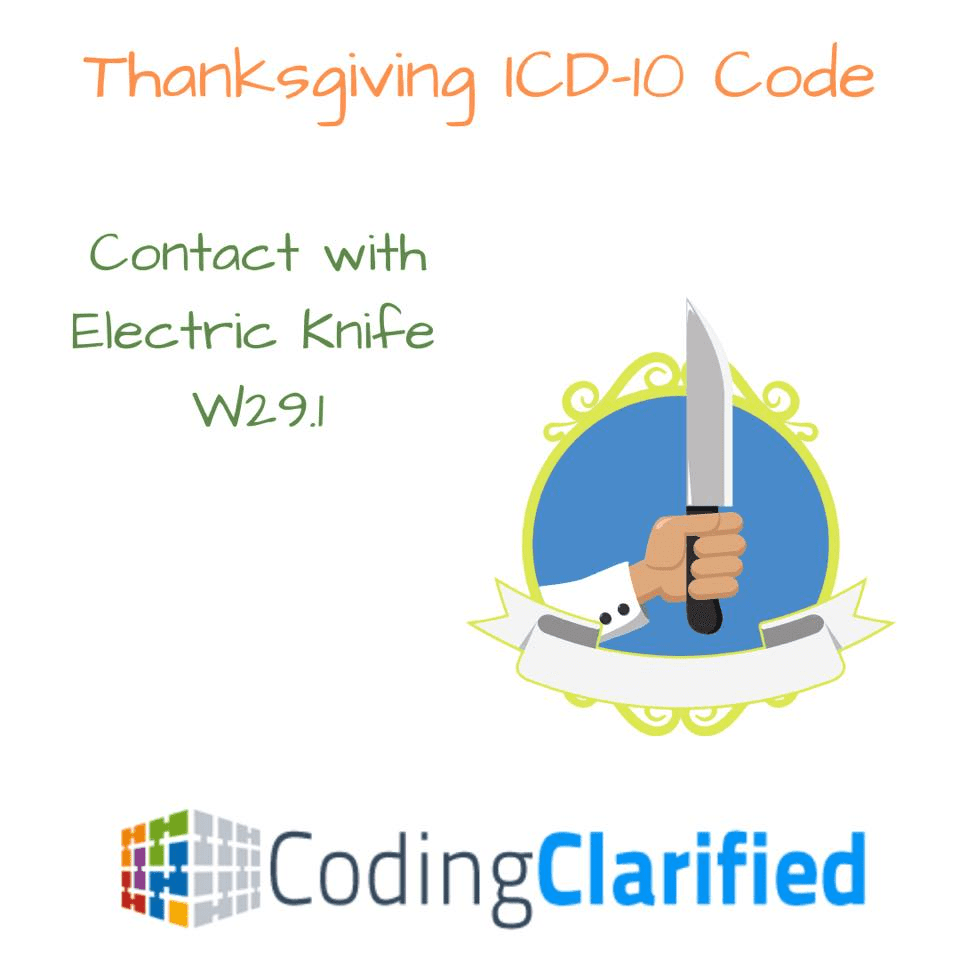 Cutting into a turkey can sometimes be difficult with an average knife. A tip would

be to use an electric knife. But don’t end up with this on your medical records. 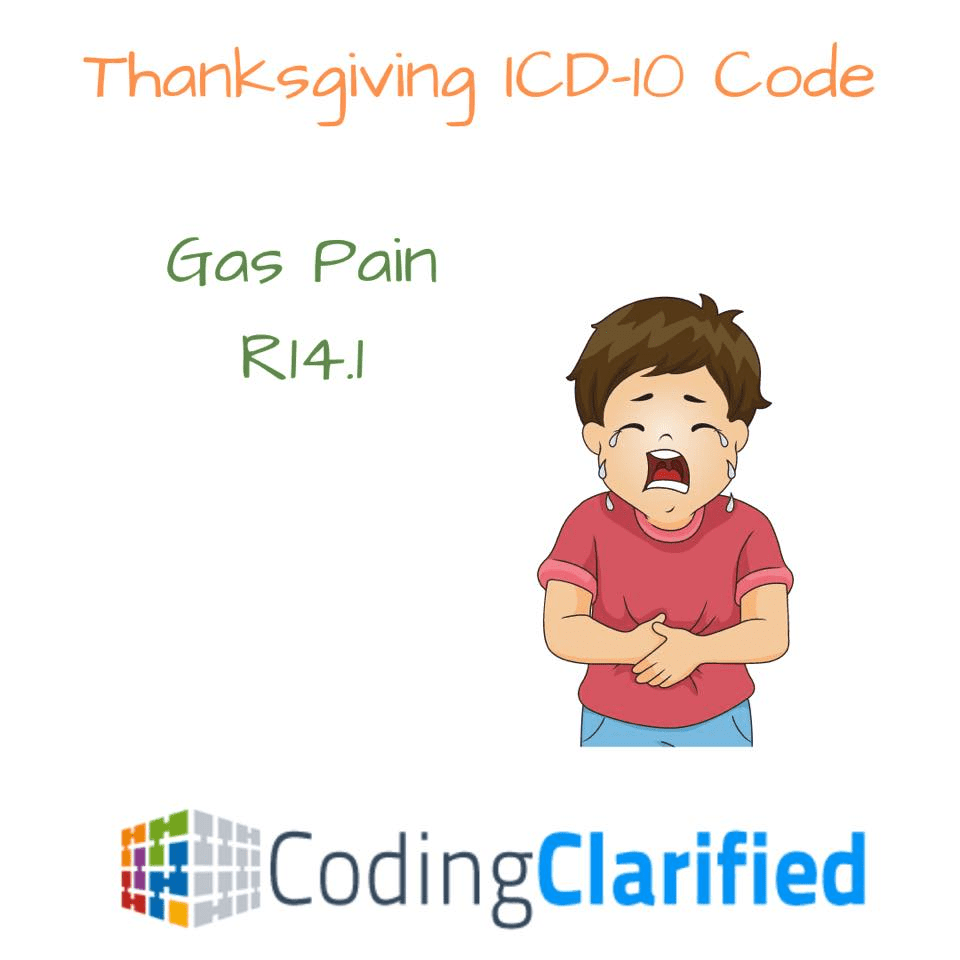 Beware of the possible side effects of Thanksgiving. They may include a series of painful gas. 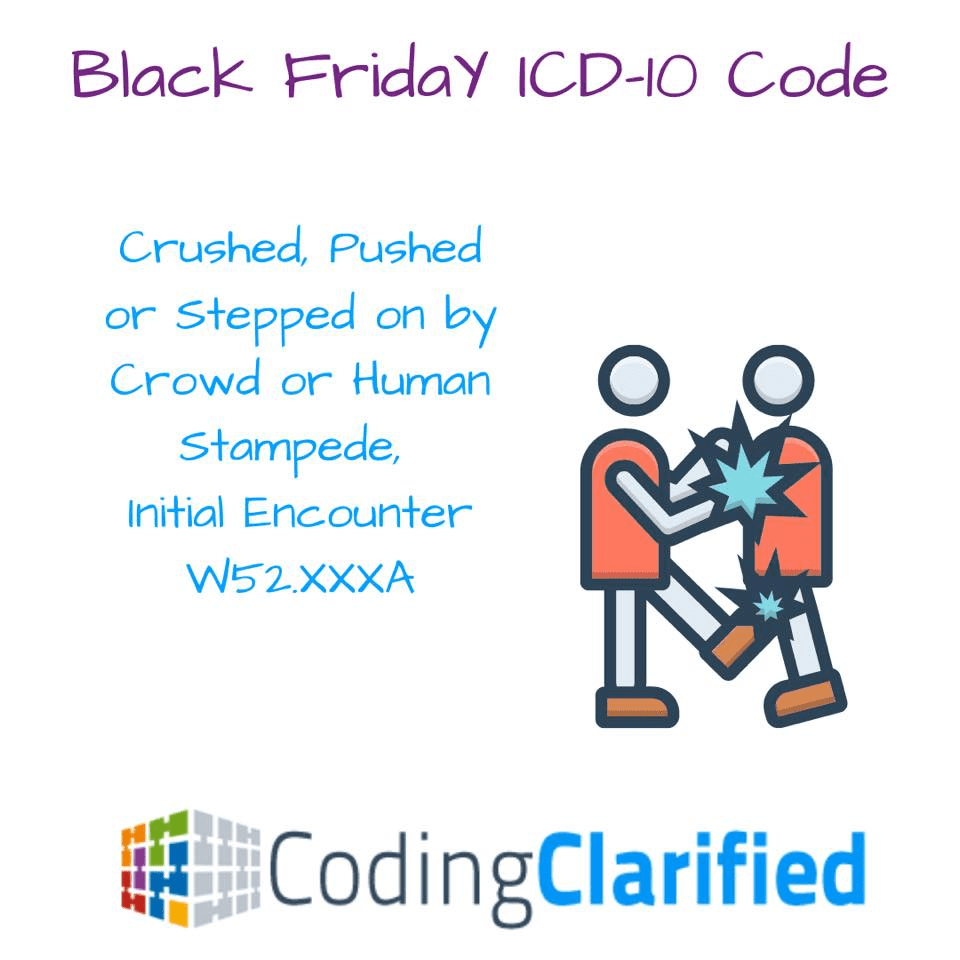 You may need protective gear while shopping on Black Friday, especially this year. Being crushed, pushed or stepped on is a likely occurrence while taking part in this tradition.


ICD-10 Code W52.XXXA  Crushed, pushed or stepped on by crowd or human stampede 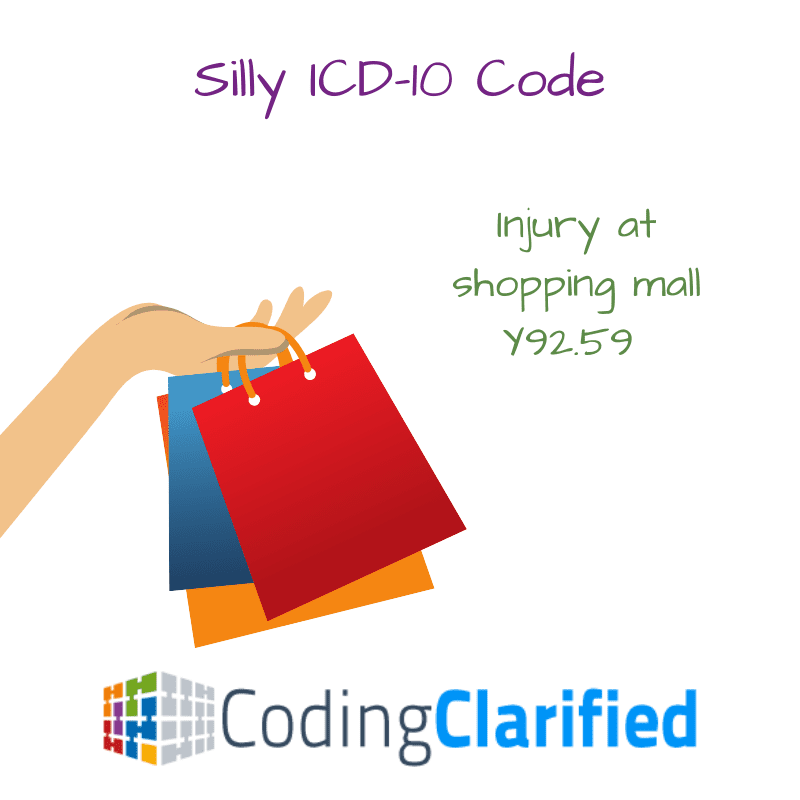 Be careful Christmas shopping out there at the mall this Black Friday. You may end up with this injury.


ICD-10 Code Y92.59 Other trade areas as the place of occurrence of the external cause


DECEMBER
Christmas Medical Coding ICD-10 Codes
Christmas is usually the funnest holiday of the year. Christmas trees, santa, presents and family time is how most celebrate this day. This is especially fun when the kiddos are young. 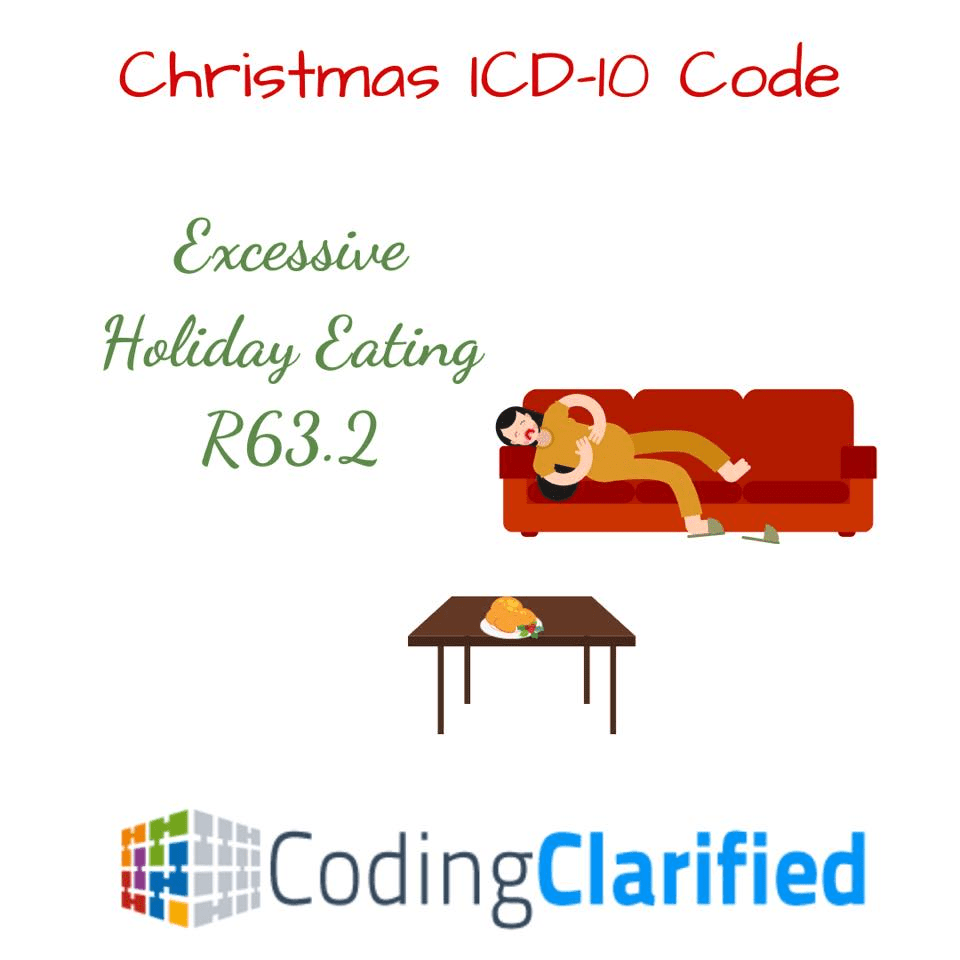 Be careful during this season, many say that with excessive eating comes excessive stomach aches. Eat safely and survive the winter season. LOL, don’t end up like this person. 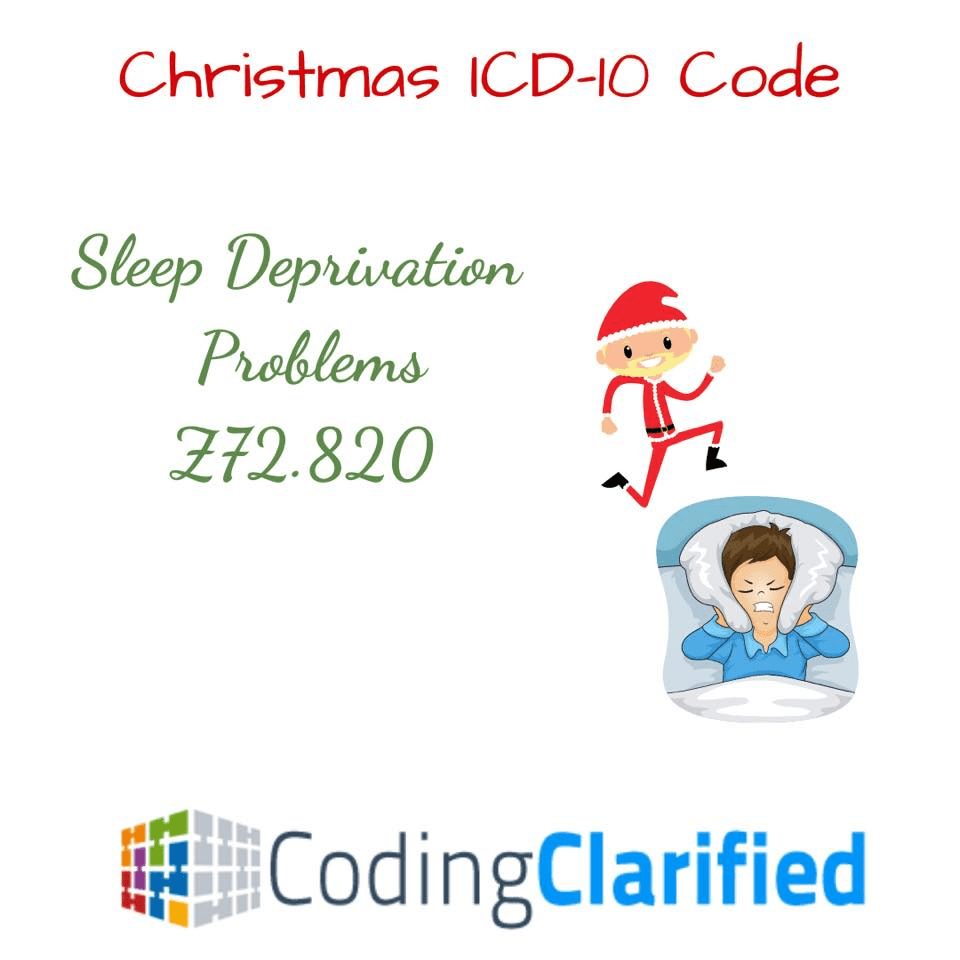 Don’t stay up too late on Christmas Eve, even if you are trying to catch Santa Clause. Just close your eyes and dream of sugar plums dancing. 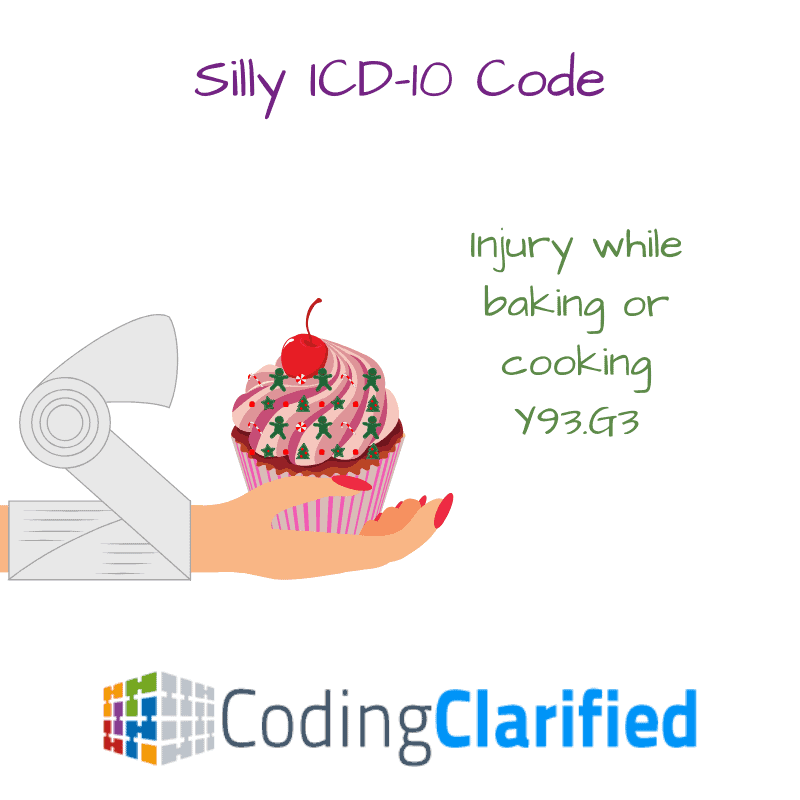 When baking this Christmas season, steer clear of injury. What types of treats are you baking for the holiday? 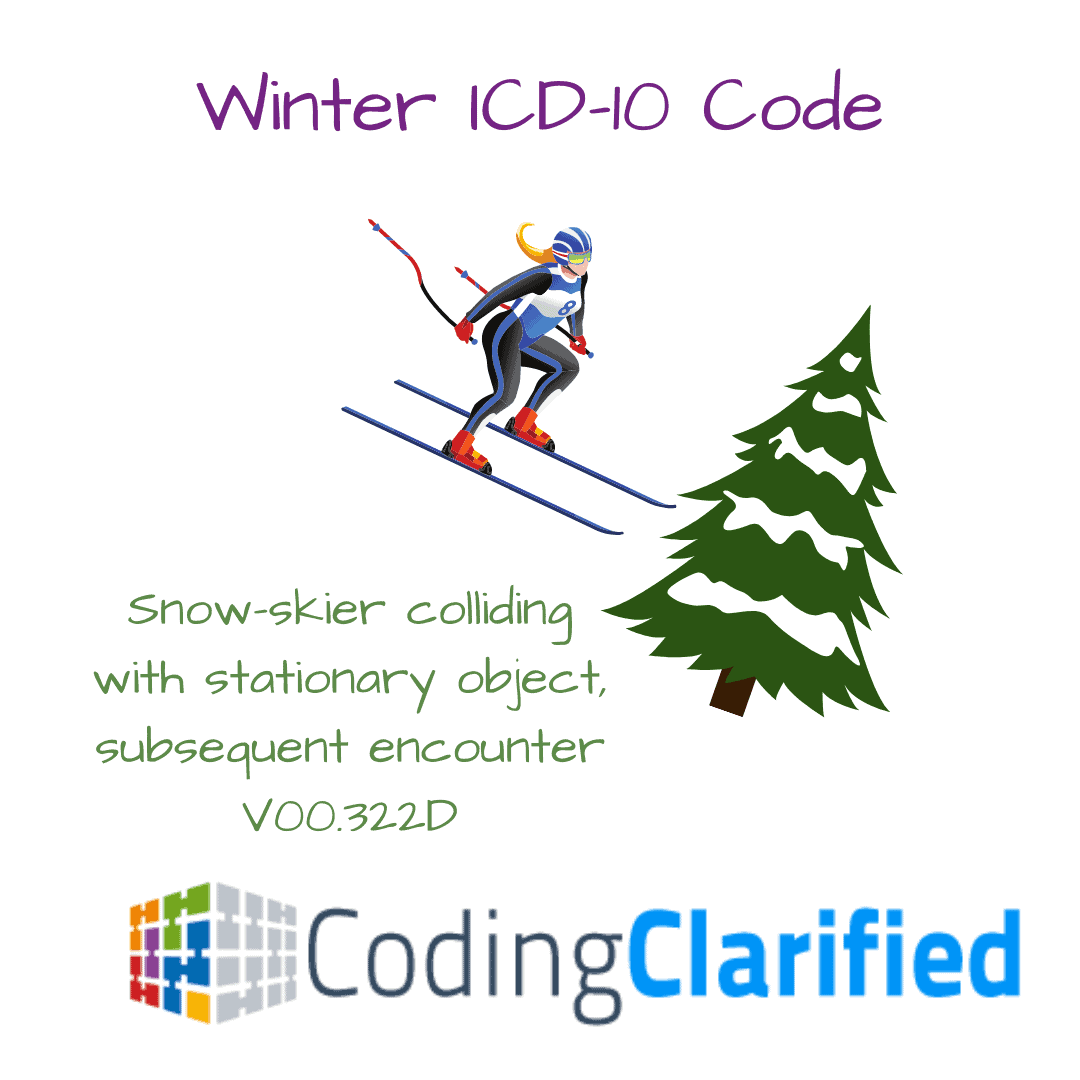 Take notice of Christmas trees and other objects while skiing. There is a code for that, dodge the pines. 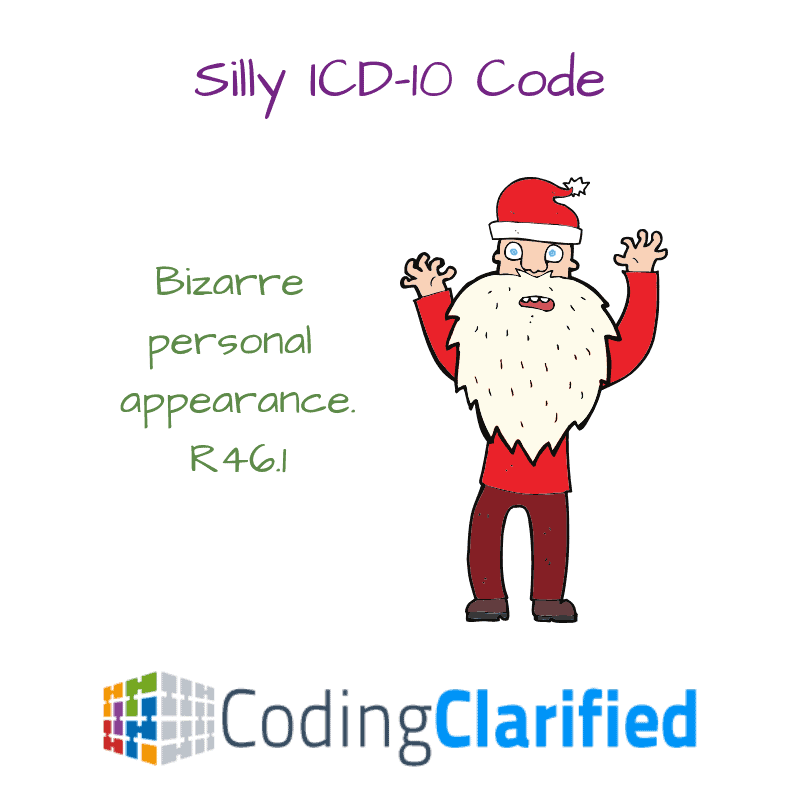 This code is for people that display symptoms and signs involving cognition, perception, emotional state and  involving appearance and behavior. They may just think they are Santa.


Hope you enjoyed these fun ICD-10 yearly holiday codes. It was a lot of fun creating these graphics. Whoever said that Medical Coding was boring is completely wrong. Be sure to spread some holiday cheer all the way throughout the year.

If you are interested in becoming a Medical Coder, Coding Clarified is here to help. We even have scholarships to offer you FREE certifications in most states. We would love to have you as a student. Apply today.